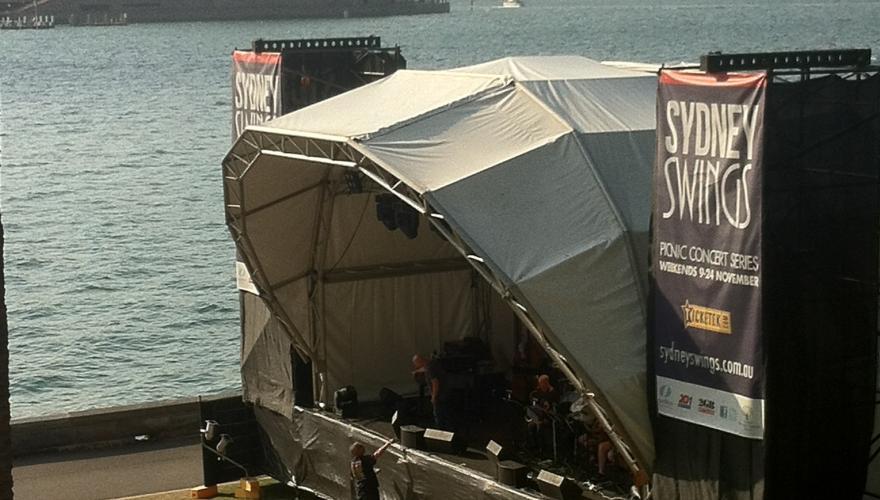 A series of outdoor shows in Sydney through November saw us fielding some cutting edge audio technology.

Sydney Swings is a series of outdoor shows across most of November on an outdoor stage at Fleet Steps in the Sydney Botanic Gardens.

The concerts featured many acts including - David Campbell, James Morrison, Grace Knight and Kate Ceberano to name a few.

We supplied a complete audio + lighting package and used the event to debut 2 of our new Yamaha CL5 consoles (FOH / Mon). The client preferred not to have a dedicated FOH ops area, so the CL5's with the Yamaha StageMix running wireless on iPads provided the perfect solution. Running DANTE over CAT5 on both consoles cut down on the usual large core system as well.

Our FOH op ended up sitting on the seawall on the edge of Sydney Harbour mixing FOH wirelessly from the iPAD (not too shabby!).

The PA featured the new Martin Audio MLA Compact - a perfect solution for this gig as it's a noise sensitive area and we needed to eliminate any noise spill to surrounding areas as the Botanic Gardens has lot's of weddings + events all the time including a Royal visit from Prince Charles and Camilla across the bay at the Sydney Opera House.

The processing power of the MLA system allowed us to keep the main audio to a defined area and also have only a 1dB level reduction from stage to the end of the venue (about 80mtrs).

The flown system is virtually weather-proof and this was proven as it rained and stormed quite a bit while the PA was up and it didn't miss a beat.

A great debut gig for all this new gear.